The holiday season is officially here! While you are busy preparing for the holidays, the BIGteam is here to keep you updated on all your favorite tech news. So pour yourself some eggnog, turn on the  Christmas tree lights and catch up on the latest news in the tech world from the past two weeks.

Alexa for Business
It’s time to welcome a new coworker to the office! Amazon recently announced its latest Alexa addition – Alexa for Business. Amazon claims this new feature will simplify tedious office tasks and give employees more control and organization within the workplace. Alexa will be able to fulfill a number of tasks including booking conference rooms, dialing into phone meetings, recording notes, finding directions and even helping train new employees.

Recently partnering with Microsoft’s Cortana, Amazon’s latest Alexa update raises some questions about whether this is crossing too far into Microsoft’s realm of expertise. This latest announcement even has some people wondering if we will see Alexa on our workplace desktops one day! As for us, we’re still waiting to see Apple’s homepod.

Instagram
Once again, Instagram introduced another update that seems very similar to its competitor, Snapchat. As these two apps continue to compete against one another, Instagram’s latest update includes the introduction of “Highlights.”
Instagram noticed users were downloading their Instagram Stories daily, leading the social media app to launch Highlights, a function that automatically saves stories to a private section on the user’s profile instead of their phone. User’s can go back through the archive and have the ability to reshare stories to their profile and even package them to create a collection of memories to share. Not only will this increase the amount of video posts we see on our feeds, it will also make using Instagram Stories more appealing.  But don’t worry, if you want your story to disappear after the 24 hour limit, there’s a way to opt out of this feature. Rest assured the BIGteam will be keeping our eyes peeled to see how Snapchat’s new update will compete. 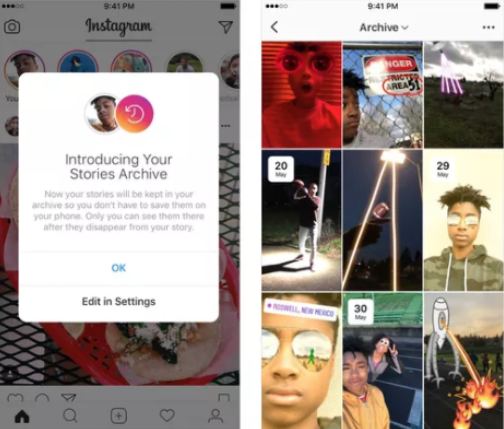 Apple Pay Cash
Venmo? Square Cash? Apple is ready to compete with these apps with its latest update introducing Apple Pay Cash.
With the new iOS update (11.2), users with iMessage are able to send money right in messages by using Siri or the in-app functions found at the bottom of the message screen. Users also have the option to use it as a text command. For example, try typing “Can I have $5” to someone and the phone will automatically recommend setting it up as an Apple Pay request instead of just a message. Once the money is sent, it will be placed right into your Apple Pay Wallet which can be used anywhere that accepts Apple Pay. Or, if you prefer, you can transfer the money directly to your bank account, instead.
But heads up, there are few fees associated with Apple Pay: if you want to add money to your wallet you cannot add anything less than $10 and you will be charged 3% for any use with a credit card.

Nevertheless, this new addition will make it even easier for friends to send money back and forth. Maybe they’ll even be more willing to pay for that sandwich for you next lunch: “Just Apple Pay me later.”
(Also new from Apple? The new iMac Pro is released this week!)

oogle
Next time you Google your question about Nick Jonas, get ready to see Nick answering the question for himself. Google announced it is launching a new feature for its search engine that allows celebrities to answer common or trending questions about themselves with a brief video. The clips are recorded for the most searched Google questions about the celebrity and will appear at the top of the search results before any other link.
While this new feature will only be seen in the mobile app and mobile web page, the company hopes to bring it to desktop soon, too. Currently, the company has recorded answers from 11 celebrities: Priyanka Chopra, Will Ferrell, Tracee Ellis Ross, Gina Rodriguez, Kenan Thompson, Allison Williams, Nick Jonas, Mark Wahlberg, James Franco, Seth MacFarlane, and Dominique Ansel. Google hopes to continue adding more over the next few months. Now you’ll be able to instantly see your favorite celebrities right when you need them and get the best source for all your celebrity questions.

New technology means less time spent at checkout! American Express announced that starting next year, they will no longer require signatures with purchases. “Our fraud capabilities have advanced so that signatures are no longer necessary to fight fraud,” said American Express Executive VP Jaromir Divilek. This joins other card companies like Discover and Mastercard who have also decided to forgo signatures.

Looking for more tech news and updates? Be sure to follow us on Twitter and check back here in two weeks for the latest BIGnews in the Tech World.