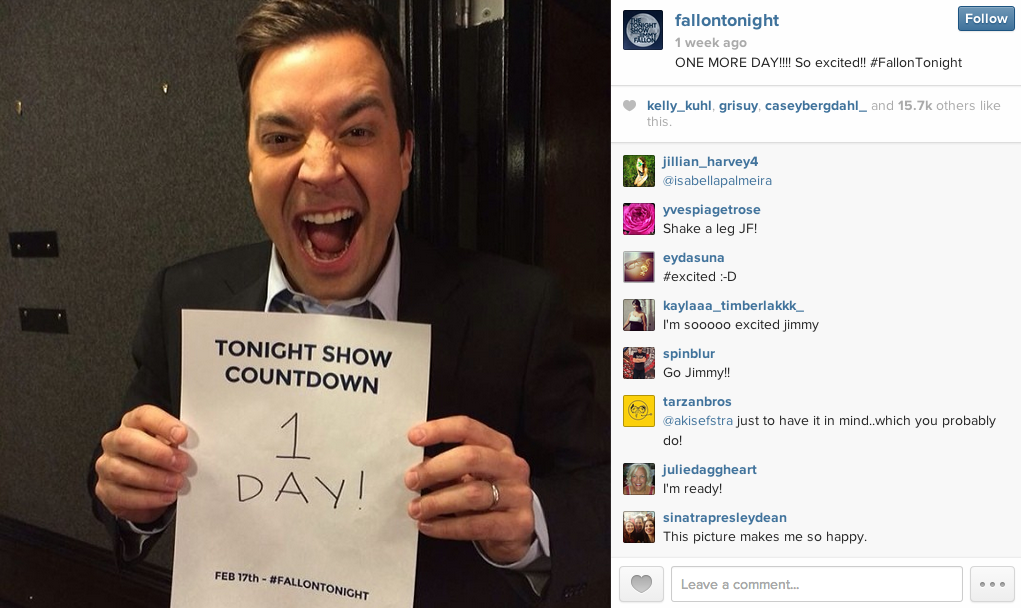 After 22 years, Jay Leno passed the Tonight Show torch to Jimmy Fallon on February 17, 2014. As expected, Fallon’s debut was a huge (and hilarious) success. But we noticed something else about the show, too: #FallonTonight went viral on social media.

Why is this so important? “The ascension of Mr. Fallon, 39, to ‘The Tonight Show’ throne represents a new era in late-night viewing, one where advertisers value a show’s total audience–its viral video viewers and Twitter followers along with the TV watchers being lulled to sleep by topical monologues and skits,”  wrote AdAge. While attracting viewers to the show is, of course, important, Fallon must also engage with fans online.

Fallon may be new to The Tonight Show, but he’s already a seasoned social media pro and each of his social profiles has a larger following than those of his competitors. Read on to find out how Fallon leveraged his strong online audience to promote his Tonight Show debut.

Social media is the perfect place to promote an event. At BIGfish, we utilize Facebook, Tumblr, Instagram and Twitter to promote events for our client Iceland Naturally. Whether it’s a festival, tweetup, or TV premiere, you should always start posting about the event on social media in advance. Make sure fans and followers know what’s going on, how they can get involved, and why they should be excited! This is a great way to build buzz before the event even starts.

Fallon spent the week leading up to his Tonight Show debut getting his fans pumped for the show and expressing his own excitement. He sent out tweets, like this one:

See you guys tomorrow. Get a good night sleep. This is so exciting. #FallonTonight

And also promoted the show by simultaneously engaging with fans, as he often does:

“@AmandaPlonka984: @jimmyfallon in class this week we watched you, I can't wait for #FallonTonight to come on. Are you excited?” Beyond.

Five days before the first show, the Fallon Tonight Instagram started a daily countdown. Then, 12 hours before showtime, it featured hourly updates with photos of the Tonight Show mug at different NYC landmarks and encouraging users to use the #FallonTonight hashtag.

If all that wasn’t enough, Fallon announced the launch of the Late Night App that enables users to easily tweet about the show, submit videos for the latest challenge, play free games and see show-related content. By sharing information about #FallonTonight in unique and fun ways on several platforms, they created buzz around the big debut and gave followers a reason to not only watch but also Like, follow and share the new Tonight Show.

Give ‘Em Something to Talk About

In our world of mobile devices and 24-hour news, content becomes ‘old news’ fast. Waiting to post content after an event is often too late. Users want and expect live updates. This was something the Fallon Tonight team did better than any other late night TV show has in the past.

Once the show began, the Tonight Show team posted updates and clips online, making it easy for users to view and share. Almost immediately after Fallon and Will Smith performed the “Evolution of Hip-Hop Dancing” on air, the video clip was uploaded to YouTube and posted to the Fallon Tonight Facebook page. The result? The video got more than 100,000 Likes and 13,000 shares on Facebook and now has more than 7 million views on YouTube (and still climbing every day).

The Fallon Tonight Tumblr page also featured several .gifs and videos from the show – a perfect place to put media that makes it easy for users to share and send to friends. All of these tactics extend the reach of the show far past those viewing it live.

Brands work hard and long to craft their brand voice, and social media is a great place to refine and express that voice. Having a consistent brand voice, whether it be serious, friendly, sarcastic or sincere, strengthens the overall brand personality and helps build relationships with fans. Jimmy Fallon’s social media profiles are a shining example of this in action.

“Mr. Fallon is a charming and gifted comedian who, on his first night, chose to be subdued and at times even serious. That said as much about the uncertain future of “Tonight” as it did about its new host,” The New York Times wrote of Fallon’s Tonight Show debut. Fallon’s honest, humble personality that makes him so likeable is also clearly visible in his social profiles. Fallon’s personal posts garner lots of engagement from his followers, and the consist voice from platform to platform helps keep the Fallon Tonight brand in tact.

Just did my last appearance with @jayleno. Sooo many fun times at that studio with him. Thanks to Jay and crew for always treating me great.

“February 17, 2014 This is it. We are starting a new chapter of the Tonight Show. I can’t even begin to describe what we are all feeling right now here at 30 Rockefeller Plaza, NYC. But – I know that we’ll never have this exact feeling ever again. By this time tomorrow we’ll no longer wonder what it would be like to do the Tonight Show. We can’t put that feeling – that moment back in the bottle. All we can do is try to make the best show that we can and make people happy. And we will. Here’s to the first of many. Fun.” Fallon wrote in this Instagram post.
What other TV shows do a good job of integrating and leveraging social media? Tweet @BIGfishmarket and let us know!
Update
On February 28, the Today show reported that some 10.42 million people viewed Jimmy Fallon’s first week on The Tonight Show, with delayed DVR-watchers factored in. This is the biggest  audience since Johnny Carson hosted the show from 1962-1992. Weeks into his new show, Fallon is still giving “night owls a good reason to keep watching,” but I believe Fallon’s initial social media success also convinced people who missed the debut show to tune in for the rest of the week. Fallon’s perfect mix of social media expertise, likable personality and shareable content are clearly a recipe for success!
–Brigid Gorham