In part two of five in our series of predicted social media trends for 2014, we discuss the future of Twitter. Here at BIGfish, we love Twitter. It’s a versatile platform that quickly adapts to social trends and provides great opportunities for marketers. Between capitalizing on advertisements, tapping into video and visual content with Vine and expanded photos, navigating the murky waters of second screen apps, and a successful IPO, Twitter seems to be taking full advantage of all the right opportunities. Read on to find out why we predict Twitter will increase in popularity and importance in 2014.

While Twitter is newer to the advertising game than Facebook, Adobe’s most recent Social Intelligence Report found that Twitter drives more shoppers to online commercial sites than Facebook does. The same study also states that Twitter experienced a 258% increase in click-throughs from September 2012 to September 2013, and its revenue per visitor increased 300% in the same period, outpacing its competitors. Now that $TWTR is a public company, generating ad revenue is vital; according to CNN Money, “Twitter’s business model revolves around ads.” Although Twitter raised about $1.8 billion through the sale of 70 million shares during its IPO, the company has yet to turn a profit. While the lack of profit isn’t too encouraging, we think the increase in ROI on Twitter ads will drive more marketers to purchase them, creating more revenue for Twitter in 2014.

Twitter and TV are becoming increasingly integrated. “There’s a huge opportunity for Twitter as a second screen for television, especially for events like [TV series] premieres, the Grammys and the Super Bowl, when everyone’s tweeting,” BIGfish president David Gerzof Richard recently told the Boston Herald. Many shows encourage online conversation or voting on Twitter in realtime with the use of a designated hashtag. In addition, Nielsen announced “Nielsen Twitter TV Rating” in December 2012. The rating measures the number of users tweeting about specific TV programs, the number of unique tweets per program, and the number of users viewing those tweets, which further solidifies the growing importance of social TV.

Since 40% of U.S. tablet and smartphone users visit a social network while watching TV, and “the number of people tweeting about TV was 19 million in the second quarter, up 24% over the year-earlier period,” it’s no wonder Twitter and Nielsen partnered. Statistics from Twitter TV Ratings can be impressive. For example, 9.3 million unique users saw tweets about the series finale of “Breaking Bad,” making it No. 1 in the Twitter TV Ratings for the week of Sept. 23.

More recently, Twitter partnered with Comcast to create the “See It” program that converts Twitter into a social remote control. With “See It,” Comcast customers can access NBC TV shows, movies and sporting events directly from a tweet. By clicking on the “See It” button, eligible users can then click

through to watch the program live on their computer or mobile device, set their DVR to record it or “queue [the program] up through Comcast’s on-demand feature on their set-top boxes.” 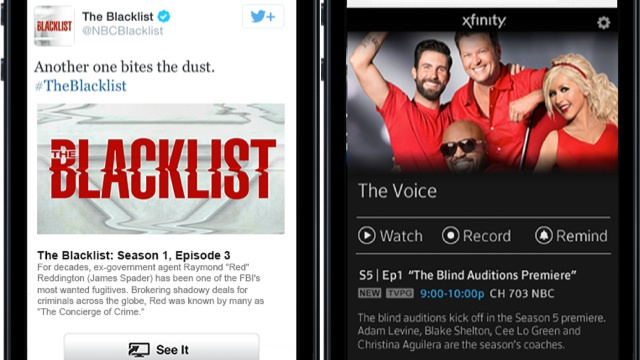 NBCUniversal is also expanding this concept to their movie ticketing app Fandango, enabling users to purchase movie tickets on Twitter via the same “See It” button.

So, how can marketers take advantage of all this?

While large corporations like NBCUniversal, Comcast and Nielsen are making bold moves to become involved in the second screen revolution, Twitter is also making it easier for smaller businesses and brands to tap into online conversations about TV.

We recently received an email from Twitter that said ”starting today, you can more easily tap into, and be part of conversations with people on Twitter talking about specific TV shows, by using TV conversation targeting,” and Twitter’s conversation mapping technology. The email outlined several ways brands already used this tool during beta testing:

“In initial beta testing, we’ve seen advertisers use TV conversation targeting in a number of different ways, to build upon their TV strategies, whether is to extend regional TV spots, add reach to their national buys, or to take advantage of non-traditional TV integrations.  Additionally, brands are using TV conversation targeting around live airings of TV shows to promote content that builds upon the on-air storylines.”

While this may not be for every brand, finding connections between your brand and popular TV shows could be another way to actively engage with customers. For example, for our client Iceland Naturally, we’ll keep an eye on “Game of Thrones,” which is partially filmed in Iceland, and look for opportunities to build on that conversation. The popular HBO show averaged 14 million viewers per episode last season and presents the perfect opportunity to experiment with Twitter’s TV tools.

Get ahead of the crowd

Given Twitter’s recent growth and success, we recommend getting your brand on Twitter (if it isn’t already) and investing time and money into this platform. While Twitter itself is a great way to connect with consumers and monitor conversations about your brand, Twitter ads are a cost-effective way to drive traffic and sales. We suggest pairing the new TV conversation targeting with Twitter ads during TV shows to see how your brand can become part of the conversation. Once you’ve run a few ads, analyze your results and see if this something worth pursuing further. We predict that most brands will be taking advantage of Twitter as as second screen by the end of 2014, so now’s your chance to get ahead of the crowd. Start looking for TV shows relevant to your brand, fine-tune your Twitter ad skills and engage with consumers before your competitors do!

What do you think?

Do you currently use Twitter in interesting or unique ways? What do you think about Twitter as a second screen app? Do you already keep track of the most popular shows on Twitter?