When Instagram announced the introduction of advertisements, the social media world collectively shook its head in frustration. However, when Instagram introduced its example of an Insta-ad, I found it interesting. I like that Instagram chose to share this information on its own platform, instead of just in an email with a link to lengthy terms and conditions that no one will ever read. The description under the sample ad clearly and concisely explains the company’s plans for the future of advertising. “If you see an ad you don’t like, you’ll be able to hide it and provide feedback about what didn’t feel right,” Instagram wrote. “We’re relying on your input to help us continually improve the Instagram experience.”

In the example ad, Instagram also addressed a previous controversy, stating “As always, you own your own photos and videos. The introduction of advertising won’t change this.” Personally, I appreciated the transparency and the time they took to share this information in a format that made sense.

As a marketing professional, one of my first questions was: how will they target users? Instagram states that advertisers will target people using data from both Instagram (who you like and follow) and its parent company, Facebook (your interests and other basic info). Insta-ads will show up “from time to time whether or not” you have a Facebook account. Right now, Instagram only allows ads from ten brands that have already built up substantial Instagram followings organically.

The Michael Kors ad, like all Instagram ads to come, shows up in your feed labeled as “sponsored” and enables you to “hide” ads you don’t find interesting and give feedback about about what you didn’t like about it. 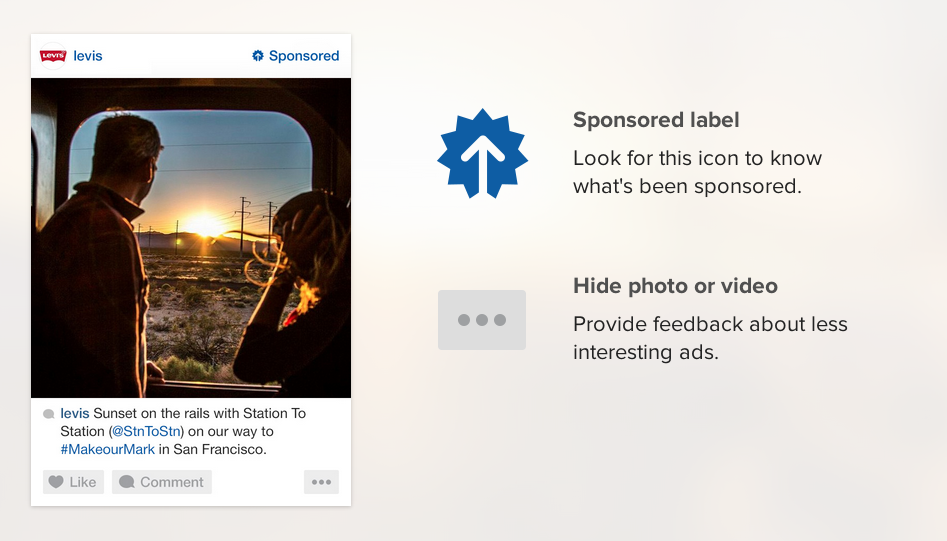 The Michael Kors ad garnered nearly 300,000 Likes and more than 1,700 comments in three days. The Next Web cited a study by Nitrogram that states Michael Kors gained nearly 30,000 followers as a result of their Insta-ad. The same study points out that after four days the “ad generated 370 percent more ‘likes’ than the average of Michael Kors’ last 5 posts, with an estimated 6.15 million users viewing it.” The study draws another interesting conclusion: the ad was “displayed in-feed and only once, unlike what we’re used to on other networks.”

This specific ad is unique in that it was unveiled as the first of its kind. With several major news outlets covering the story and linking to the ad, an incredible amount of traffic was driven to this one image. For that same reason, the feedback includes mostly negative comments directed at Instagram, often disregarding the Michael Kors brand altogether.

As HubSpot mentions, this trial period is the perfect time for other brands to watch and analyze Instagram ads to see what’s most effective. Here at BIGfish we’re keeping a close eye on Insta-ads to determine whether or not we want to use them for some of our clients. Right now, the Nitrogram study is really the only source of data and analytics on the Michael Kors ad. At BIGfish we know that results and analytics are essential to every marketing campaign, so we’re also wondering if and when Instagram will introduce its own measurement tools. With Facebook as their parent company, will they offer “Instagram Insights”?

It’ll also be interesting to see what the first Instagram video ad (aka commercial) is like. I think it might be more difficult for brands to create a successful video ad on Instagram since it’s so easy to simply scroll right by it and not even notice it’s a video (or scroll past knowing what it is). Will analytics on Instagram video ads differ from the photos? Will we be able to see how long users watched the video? Finding the “sweet spot” of an Instagram video ad will be crucial.

Even though the Michael Kors ad didn’t show up in my feed, I think it’s high quality, beautiful and appropriate for the platform. I’m interested to see the success and effectiveness of future ads that don’t carry the headline of “first-ever instagram ad revealed!” If brands put out creative, meaningful ads and target them properly, I think  they’ll be incredibly effective. It’s interesting that Instagram is forcing companies to be creative and I think this will help maintain the platform’s integrity. I also appreciate that Instagram is regulating the process and is asking for feedback from its users.

What do you think? Will you use Instagram less because of advertisements? Will they help or hurt the company? Did you like or follow Michael Kors as a result of their ad?