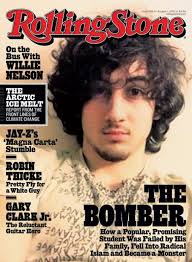 Rolling Stone has covered rock and roll, politics and culture for more than 40 years. Beginning as an underground magazine in 1967, Rolling Stone was immediately controversial due to its coverage of and ties to the hippie counterculture movement during a particularly tumultuous time in the United States.

Although a mainstream publication now, Rolling Stone hasn’t lost its controversial tendencies.  In January 1981, the Rolling Stone cover featuring a naked John Lennon spooning Yoko Ono raised eyebrows. Another cover featuring a nude Janet Jackson stirred up controversy in 1993. And in June 2010 Michael Hastings’ story, “The Runaway General,” made headlines across the country and the eye-opening investigative journalism led to the end of General Stanley McChrystal’s military career.

Now, Rolling Stone is making waves again with its August 3 issue.  The cover of this issue features a photo of Dzhokar Tsarnaev with the tile, “The Bomber: How a Popular, Promising Student was Failed by His Family, Fell in to Radical Islam and Became a Monster.” Many are outraged and feel the photo glamorizes Tsarnaev and therefore completely disrespects those affected by his alleged violent actions. The public voiced their opinions online, sparking a #BoycottRollingStone hashtag on twitter, discouraging anyone from purchasing this issue of the magazine.

Mayor Tom Menino wrote a letter to Jann Wenner, co-founder and publisher of Rolling Stone, condemning the article, and pointing out that the magazine should have instead focused on the “brave and strong” survivors of the bombing. Menino closes the letter with these powerful words: “The survivors of the Boston attacks deserve Rolling Stone cover stories, though I no longer feel that the Rolling Stone deserves them.”

It has yet to be seen if Rolling Stone had any interviews with Tsarnaev or uncovered any new information on the bomber, but not everyone is angered by this Rolling Stone cover. USA Today reported that Rolling Stone’s first response to this issue was to refer to their cover story on Charles Manson with the coverline “The Incredible Story of the Most Dangerous Man Alive.”  This article, which features an interview with the man convicted of conspiracy and murder, won a National Magazine Award in 1970.

Boston Globe columnist Yvonne Abraham’s article “The Rolling Stone cover image can’t hurt us” makes a case for the Rolling Stone cover story. She points out that Rolling Stone “does something newspapers like [The Boston Globe] have taken great pains to avoid: It convicts him.”  In response to the criticism of the particular photo chosen for this cover, Abraham argues this: “To see him as that skinny kid on the ground, or on the Rolling Stone cover, is to confront the possibility that good-looking kids who seem totally normal, good students who give off no sign of trouble at all, can become monsters, too.”

The editors at Rolling Stone issued a statement on Wednesday afternoon defending the article.  In this statement they said “the cover story we are publishing this week falls within the traditions of journalism and Rolling Stone’s long-standing commitment to serious and thoughtful coverage of the most important political and cultural issues of our day.”

What do you think?

Was Rolling Stone just trying to gain publicity with this? Were they wrong in publishing this story, or could it be a historic piece of investigative journalism? Would your opinion change if they had used a different photo of Tsarnaev?

8 Ways PR is Important to Brands