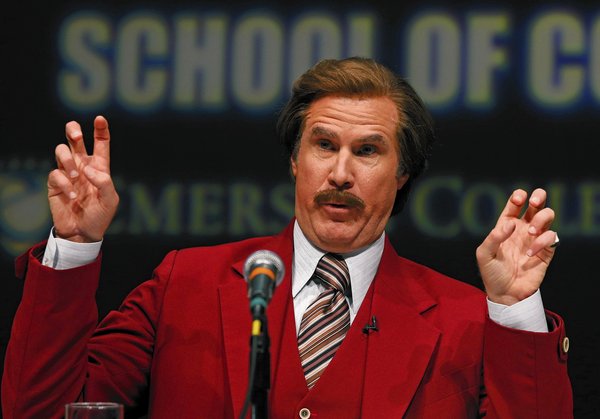 For the last few months, Will Ferrell fully immersed himself in his character, Ron Burgundy, and traveled all over the country to appear in Dodge advertisements, anchor local newscasts, conduct interviews on ESPN, commentate Canadian curling, appear on Conan, and even hold a press conference at Emerson College. If you didn’t see Burgundy’s stunts, then you read about them, heard friends talking about them, or learned about them on the news. It seems nearly everyone in North America was aware that  “Anchorman 2: The Legend Continues,” was scheduled to be released on December 18, 2013.

In an age when consumers fast forward through commercials, scroll past banner ads and click through popups, some good PR and a little creativity can go a long way. Director of the film, Adam McKay, estimates the campaign is worth at least $20 million in free publicity, according to Entertainment Weekly. However, while the campaign meant everything for awareness, it didn’t necessarily produce the results you’d expect. The sequel’s three-day weekend total of $26.8 million pales in comparison to the original’s $28 million in 2004. Additionally, the new film’s five-day total of $40 million is still less than the original’s $46 million, according to The Los Angeles Times.

Perhaps the low numbers are a result of a poor product. The New York Times writes: “‘Anchorman 2: The Legend Continues’ is in danger of being overshadowed by its own marketing campaign.”  When searching “Anchorman 2” on Twitter, the suggested searches are: “Anchorman 2 quotes” and “Anchorman 2 terrible.” If your product is “terrible” consumers aren’t going to buy it, regardless of how well it’s marketed, advertised and promoted.

Others believe that the campaign pushed too hard and consumers grew weary of Burgundy before the film was even released. The Week published an article that discusses “How nonstop marketing killed my buzz for Anchorman 2” and suggests that Ron Burgundy was not an ideal character to lend himself to discuss real news stories. But as a professional marketer who’s always trying to gain exposure for clients, I can’t imagine saying “okay, I think that’s enough coverage” and letting up. John Greenstein, chief marketing officer at Paramount, led the campaign and said, “My job as a marketer is to want as much of the right exposure as possible because we believe in this movie so much and we believe in this character and we believe in these filmmakers.”

If you ask me, Greenstein did his job. He generated buzz about the sequel and gave people something to talk about. Although ticket sales weren’t impressive, the Anchorman 2 marketing campaign did wonders for awareness and blazed a trail for creative movie marketing. Still, the film will be in theatres for another few weeks and ticket sales could fare better in the long run – or perhaps movie rentals and DVD purchases will prove more promising. It’ll be interesting to see if and how movie marketers use some of the same tactics from this campaign in the future.

What did you think of the Anchorman 2 marketing campaign? Did you go see the film? What would you have done differently if you were promoting the movie?