Samsung made major waves in the tech world last Wednesday during its Galaxy S10 Event. ‘Samsung Galaxy Unpacked 2019’ introduced a number of new products and features that the company ensures will “change the shape of tomorrow” and catapult us into a new era of technological capability.

Here are the most notable announcements from the highly-anticipated event:

Samsung’s most innovative creation to date, the Galaxy Fold is a device unlike any other. A powerful smartphone and revolutionary tablet all in one, the device offers a 4.6” front-facing display in addition to a 7.3” Infinity Flex display that is revealed when the device is unfolded. The interior tablet screen enables three-app multitasking – a never-before-seen smartphone feature. The Galaxy Fold also comes with increased processing power, up to 512GB of onboard memory, and a whopping six cameras in total.

The Galaxy S10 is the newest generation of Samsung’s iconic Galaxy smartphones. A new, improved display screen covers the whole face of the phone, and incorporates the new Infinity-O Display, which provides a higher display quality than ever before. The Galaxy S10 comes in three different models: the S10+, which has the largest display of the three at 6.4”; the S10, which offers a 6.1” display; and the S10e, which is a more compact version of the device. The S10 also comes equipped with a new Wireless PowerShare feature which enables built-in wireless charging. With this feature the S10 can serve as a wireless charging pad for watches, earbuds, or even another Galaxy smartphone!

The latest phones in the Galaxy series have the storage capacity of a laptop – that’s 1 terabyte of storage for your phone; meaning you’ll never have to worry about running out of storage or your photos taking up too much space! 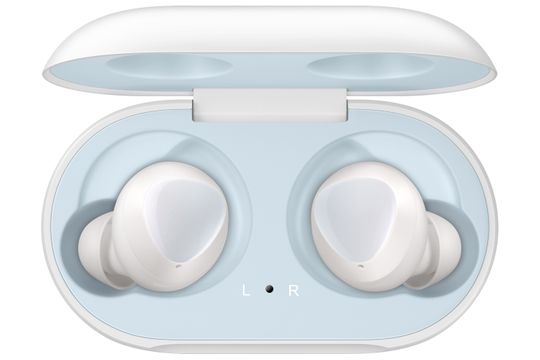 The Galaxy Buds are Samsung’s first completely cordless headphones. They are compatible with Samsung’s voice assistant, Bixby, and have the battery power to stream up to 6 hours of music on a single charge. The Galaxy Buds’ charging case is also cordless, and can be recharged using the Galaxy S10’s new Wireless PowerShare feature! Even more exciting and innovative? These headphones are capable of understanding English, Spanish, German, and Italian, so you can now give Bixby commands in a variety of languages. They can even tell the difference between British and American English!

The Galaxy Buds are strikingly similar to Apple’s Airpods – like the charging cases -, but Samsung’s version come in at a much more affordable price at $129. In terms of functionality, we still have to wait for the product to hit the shelves to compare them, but it looks like the Galaxy Buds might serve as real competition!

These two products are the next-generation Samsung wearables. The Galaxy Watch Active is a new and improved smart watch, made from lightweight aluminum with a soft, durable strap. The Watch Active boasts 5ATM water resistance, meaning it can be worn during nearly any activity.

The Galaxy Fit is dedicated solely to fitness. Weighing in at only 23 grams, the device is capable of checking the user’s heart rate, counting steps, tracking exercise and sleep, and even monitoring stress. It has the same level of water resistance as the Watch Active, and can be powered for an entire week on one charge. If it happens to run low on charge, these two products can also be charged using the Galaxy S10’s Wireless PowerShare!

Samsung also announced that it plans to launch its own 5G mobile network. This network will be 20x faster than 4G and can bring as many as 1 million devices per square kilometer online, making network congestion a thing of the past. With this innovation, Samsung hopes to revolutionize the next generation of mobile networks. A 5G-compatible model of the Galaxy S10 will be released when the network is launched, and will come equipped with Hyperfast speeds, enabling users to watch movies and play games instantly with the fastest speeds and highest color quality.

Along with the Galaxy series products, Samsung is introducing features that make your screen time easy and efficient: Adobe Premiere Rush and an Instagram partnership. Users will now be able to shoot videos on their phones, edit them directly on their device, then upload them to their social channels – all while maintaining high video quality and without using a computer.

During the launch, Samsung also announced a partnership with Instagram, designed to enhance the experience of the app on the Galaxy S10. The S10 has an “Instagram mode” camera, with which users can take photos and easily access Instagram stories and editing tools without needing to open the app! These new features eliminate extra steps and allow content creators to share their work almost immediately.

Which of these new products are you most excited about? Let us know in the comments below or on Twitter!

Our Favorite App of the Month: Asana!