BIGfish at #CES2016: the Coolest Tech at the Show

We survived CES! (Okay, we’re not really that surprised; we were very well prepared – more on that here.) Anyway, the BIGfish team had a great few days in Las Vegas with our clients Actionproof, Ring, TarDisk and TYLT. Between new product launches, press events, booth meetings and press conferences, we had a very busy 48ish hours at CES. But we definitely made the most of it! See below for more on what our clients announced, as well as a few highlights from our time on the show floor.
Actionproof: On Tuesday, Jan. 5, Actionproof launched the BOZON, a handy new Apple Watch charging dock. Made of premium silicone and with the ability to coil the lengthy Apple Watch charging cable inside the device, the BOZON is truly ‘the Apple Watch’s best friend.’ But don’t take our word for it! Check out the BOZON in The Verge, 9to5Mac and Phone Arena! 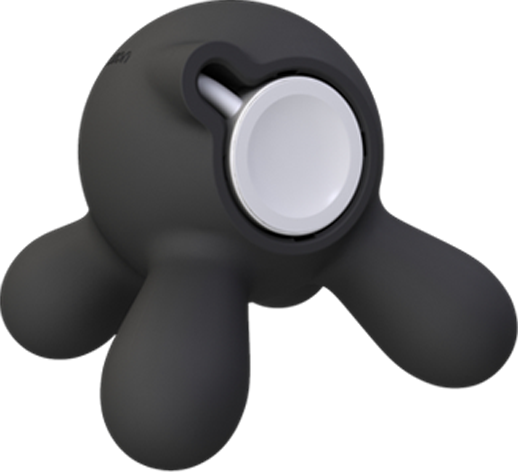 Also showcased at CES were Actionproof’s BUMPER, a protective case for the 42mm Apple Watch, and the SP-06, a rugged iPhone 6 & 6 Plus case perfect for protecting your phone from life’s drops and dings. All products are currently available for purchase on actionproof.com.
Ring: Up next is Ring, which unveiled Ring Stick Up Cam, a self-install, wire-free, outdoor security camera that features two-way audio, motion detection, cloud HD video recording and night vision. When used with Ring Video Doorbell, Stick Up Cam provides a full ring of security around customers’ homes. Stick Up Cam was met with overwhelming success at the show: 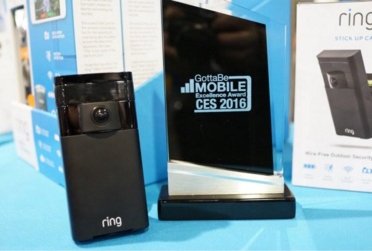 Stick Up Cam ($199) is available for preorder here: https://ring.com/stickupcam
TarDisk: After successfully launching TarDisk Pear (the only way to upgrade your MacBook’s hard drive) in October 2015, the company headed to Las Vegas for CES 2016 to unveil a new product: TarDisk Pear 2.0. This new version of Pear offers a more simplified setup process than the original. The number of steps for pearing the device with your computer has been reduced from 11 to just 8 and requires fewer computer restarts. It also walks the user through the installation process on screen, making it impossible to miss a step. Additionally, Pear 2.0 features an optional cloud storage backup that’s free for the first 14 days ($5/month or $50/year after that). TarDisk Pear 2.0 is available in 128GB ($

149) and 256GB ($399) at TarDisk.com.
So, what does the press have to say about TarDisk? Well, Laptop Mag writes: “Without much work, I doubled my MacBook’s internal storage, going from 256GB to 512GB,” and be sure to check out this video on MacWorld and a get hands-on look from Cult of Mac.
TYLT: TYLT, the company that has been named a CES Innovation Award Honoree for five years in a row (and BIGfish client, of course), returned to CES this year to unveil a handful of new accessories to keep all your devices fully charged. Keeping TYLT’s CES  Innovation Award Honoree streak alive this year was the ENERGI Desktop Charging Station, which can power five devices at once – four with 2.4A amps and one a 1A. What’s most convenient about the ENERGI Desktop Charging Station is that the fifth USB output doubles as a 3,200mAh portable battery. 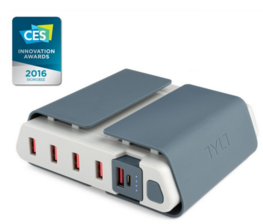 From Qi wireless chargers that power devices 3X faster than the pre-2015 standard (VU 2.0, VU SOLO 2.0, which they showed off at an insightful wireless charging press conference), to the TURBO Smart Charger line, which offers up to a 13,400mAh portable battery with Qualcomm Quick Charge 2.0 and USB-C functionality, TYLT continues to deliver innovative new products that excite consumers and the press.

Also making their formal debut at CES were the Energi+ Backpack 2.0, TURBO Portable Batteries, USB-C RIBBN and USB-C Y-CHARGE car charger, all of which will be available in Q2. Read more about TYLT’s CES announcements in Digital Trends, GottaBeMobile and iLounge.
While we think our clients stole the show, here are a few other things that everyone can’t stop talking about:

Samsung Family Hub Refrigerator
I kid you not, we got in an Uber one day in Vegas and started talking about “the fridge,” and our driver turned around and said: “You are the third group of people today that I’ve heard talking about this thing.” That should give you a pretty good indication of just how impressive (insane? over-the-top? innovative? you decide) this piece of technology is. This Wi-Fi connected refrigerator has a 21.5-inch high-def. screen that enables you to: see inside the fridge via your smartphone, order replacement groceries and play music (why not?), among a myriad of other things. Read more about it in Venture Beat. 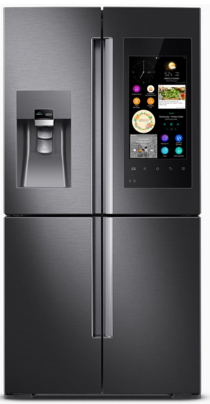 OLED Everything
OLED = “organic light-emitting diode,” or in layman’s terms, a visually stunning, flexible, efficient, and “the next big thing,” in digital displays. We had the chance to walk through the massive TV section on the show floor, and let me tell y 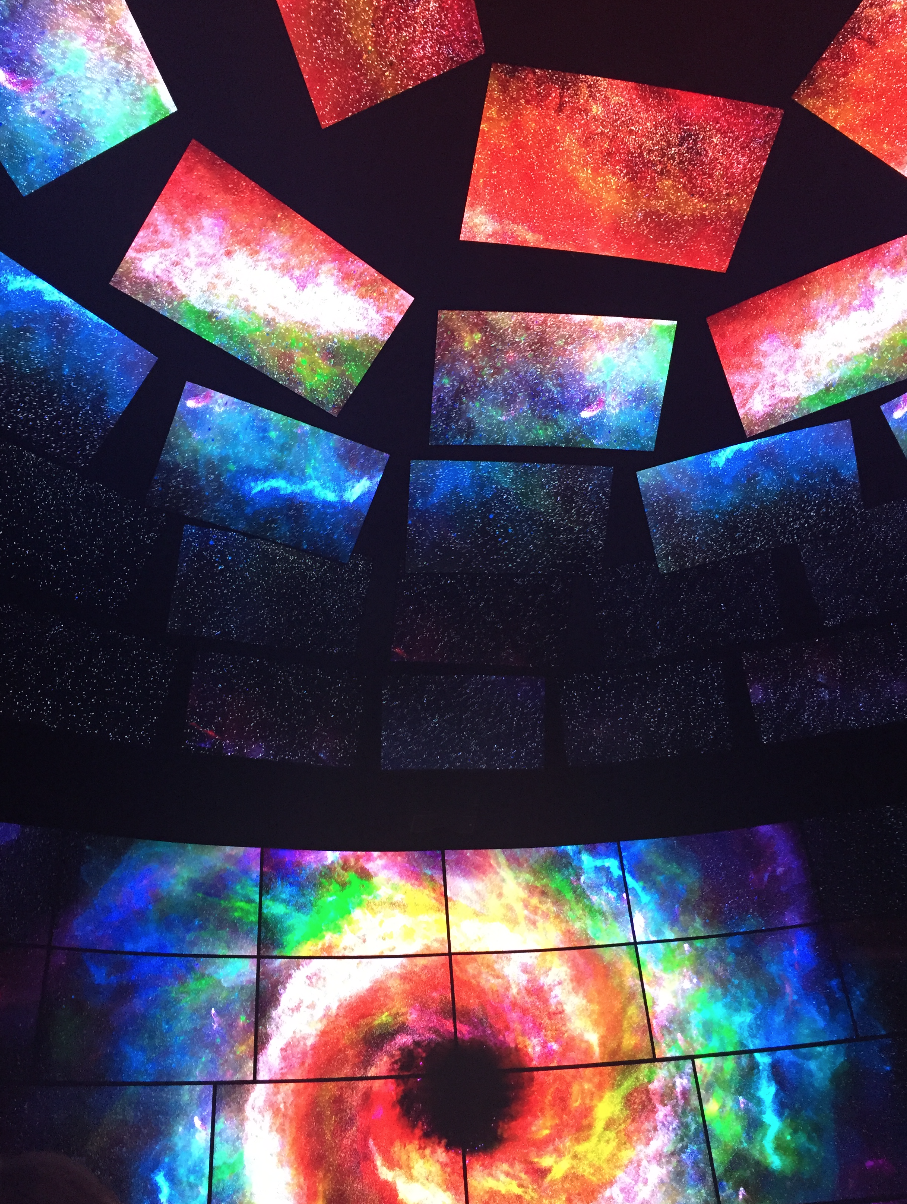 ou, it was pretty impressive. The immersive LG display (pictured here) made up of dozens of televisions mounted in a 360-degree room was breathtaking.
So, if you’re looking to take your Netflix binge-watching to the next level, check out one of these options.
Cars, Cars and More Cars
At times, it seemed like CES 2016 was the LA Auto Show due to the insane number of cars that had a presence on the show floor. How about the Faraday Future FFZERO1 concept car: a fully electric, 1,000 horsepower vehicle that can travel at a top speed of more than 200 mph. We’re not making this up. It only has one seat, though, so you’ll have to turn on some Jason Derulo and embrace the solitude. 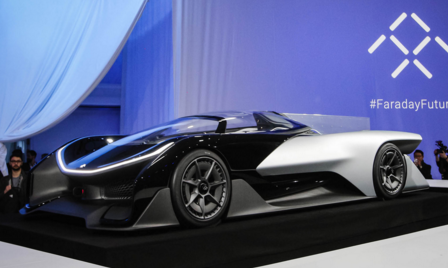 In more well-known auto industry names, we had Audi showing off their new haptic touchscreen; Chevrolet offering test drives of the new 100% electric Bolt; and BWM’s fancy “AirTouch 3D” technology that lets you use the in-dash screen like a touchscreen, but without actually having to touch it.
Unfortunately, with 2.3 million square feet of show floor, we weren’t able to see everything, but we still had a blast and learned a lot about what’s to come in the future of tech.
Still looking for more? BIGfish President David Gerzof Richard recently penned a piece on the five weirdest gadgets of CES 2016, like a pineapple-scented power bank and a fitness tracker for your pet; read more in BostInno. And if you’re an entrepreneur, see what David thinks are the six must-have upgrades that were on display at the show.
What was your favorite thing about CES? Let us know in the comments!