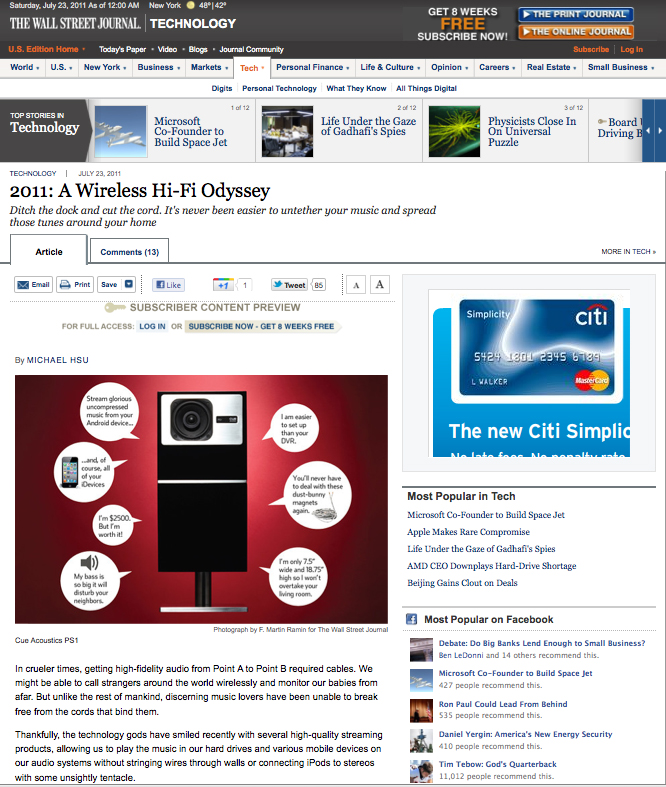 The Client
Cue Acoustics, Inc. is a very small company with a big sound that is dedicated to developing unique, high performance audio components, that thrill the ears, are carefully designed and easy to operate. Cue’s products are hand-assembled by a team of audio technicians in Somerville, Massachusetts, USA.

Audiophiles should eagerly await the release of Cue Acoustics’ PS1 speaker system, a high-end wireless audio model that will hit stores in September.
I got a sneak peak at the wonder of this upcoming, very expensive product at the start-up’s Somerville warehouse recently. It was amazing to hear such clear, crisp sound from wireless speakers that could fit on a shelf.

Each Cue-manufactured product is made by hand, carefully assembled by one person who ushers each module through painstaking testing, a process that Millen calls “the secret sauce” that separates its products from competitors.
With business having doubled in the last year, Cue is set to launch its new PS1 speaker system, a high-end set of bookshelf speakers that the company vows will outperform most floor-standing tower speakers.

When a client invites you to Panama to go swimming with their fish as a kick-off marketing meeting, a lot of things come to mind: first – a kick off meeting in bathing suits?…Not your average business trip. We quickly discovered that we were in for some interesting experiences, and a little fun too!

Open Blue Sea Farms is an offshore fishery of all-natural Cobia based in Panama. For this unconventional meeting, BIGfish set off to the Central American country to visit Open Blue’s facilities and learn about the Company through an extremely up close and personal experience.
DAY 1 – Visit to the Fishery
The drive to the fishery was a little over 2 hours through the long, winding streets of the rainforest. We conducted our initial facilitation meeting in the car while driving past cattle, dogs, chickens and several other wild animals. Again, not your average meeting. Once at the hatchery we were lucky enough to experience the entire operation from Frye to 150 pound, full-grown Cobia.

This day was incredibly productive and our eyes were opened to so many new things. We learned a lot about Open Blue, what it stands for and how it operates. It is working towards fulfilling the industry standard of delivering consistent amounts of fish with ever increasing mouths to feed while still doing what’s best for the environment, the local community and of course, the fish. It is an impressive operation working towards an admirable goal that we were lucky enough to experience first-hand. After hours of driving and exploring, the team was exhausted and we settled back into the city for some rest, eager to see what this country would have in store for us tomorrow.
DAY 2 – Kevin the Tour Guide
The next day we were fortunate enough to explore some other areas of Panama. We hired a tour guide, Kevin (who’s real name is Earl but Panamanians have a hard time pronouncing it), who was able to provide us with some amazing insights into the Country and take us to some real cool places. Of course, we started with the Canal.

After our day was complete we were tired but in awe of the amazing places we had just explored. In addition to the Canal and its accompanying museum, we drove through the old US military base where John Mccain grew up and went to high school. We took in a breath-taking view of Panama City and The Old City from an elevated location where a huge Panamanian flag flies. We shopped at a craft store full of genuine gifts handmade by native Panamanian Indians. We ate a late lunch/early dinner next to the Presidential Palace in The Old City. We drove by disco alley and Frank Gehry’s new masterpiece – a soon to be museum in Panama. Finally, we drove on the causeway that was built with the displaced dirt from the Panama Canal which we took to an island off the coast of The Old City and snapped some photos of the beautiful yacht club at the mouth of the canal. All in all, Panama is a beautiful country.
DAY 3 – Monkey Island
The final day, before heading to the airport, we made a stop at Monkey Island. We took a small boat onto the Canal towards the Island where we saw some beautiful (and mischievous) monkeys!

Next, we headed to the airport, tired but stunned at the amazing country of Panama and the awe inspiring operations of Open Blue Sea Farms. Who knows, we may just need to take a closer look sometime soon. 😉

“BIGfish was instrumental in launching our product and building the awareness we needed to compete against a $500 million competitor.”