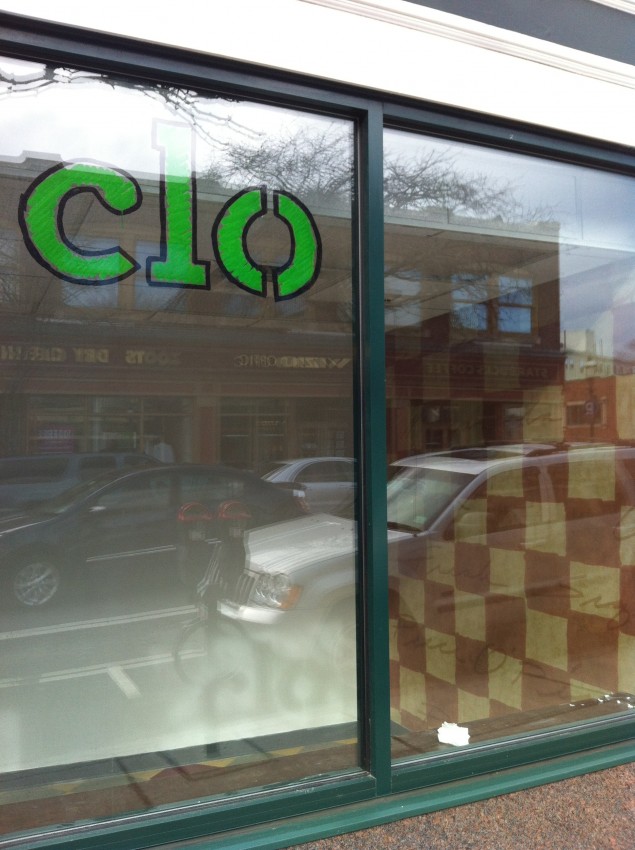 Vegetarians and health foodies alike can rejoice in the upcoming opening of the popular food chain Clover Food Lab to the Brookline Village area. Within the next month, Clover is set to open a restaurant at 6 Harvard Street, which happens to be right down the street from the BIGfish offices

Viewed as a fast food destination for vegetarians and organic food enthusiasts, Clover incorporates the ease and pace of fast food with simple recipes and organic ingredients that are relatively healthy.

From all of us here at the BIGfish team, welcome to the neighborhood Clover! 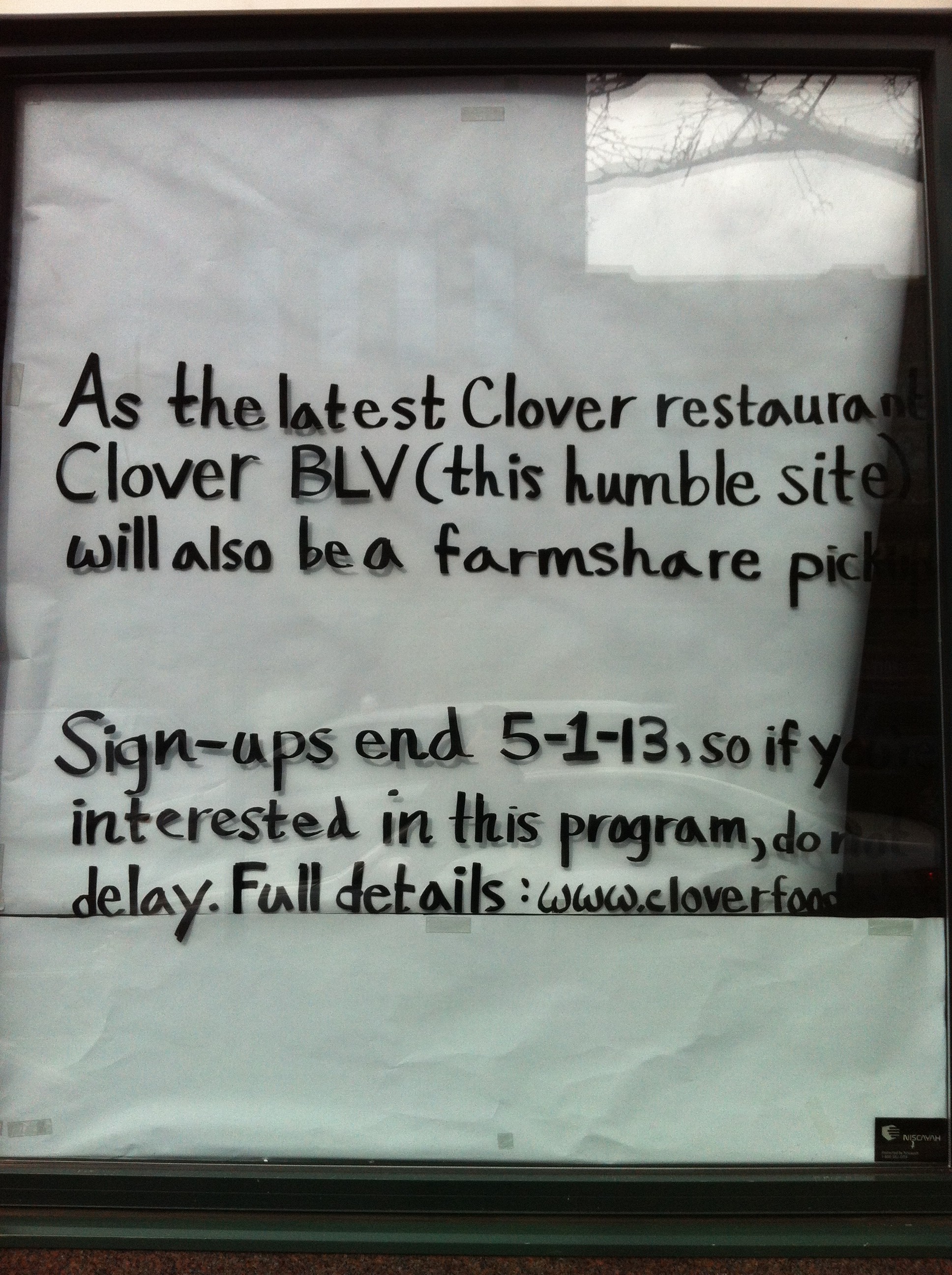 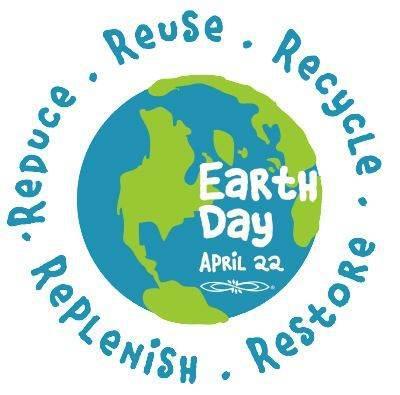 Today is Earth Day, and we are celebrating the occasion! Here at BIGfish, we pride ourselves on working with clients who are doing things cleaner, better and cheaper. It’s important to us to feel good about the work we do each day, and we strive to consistently work towards making the world a better place.

Accordingly, each of the BIGfish team members have made a pledge to reduce, reuse and recycle as much as possible throughout the day today. Even simple gestures like bringing your coffee in a reusable thermos, carpooling to work, avoiding printing documents and turning off the lights when you leave a room make an impact. We encourage you to join us in this effort!

In addition to heeding the “3 R’s,” we’d like to share some of the great things a few of our clients do for the environment:

Later this afternoon, we will be enjoying some tasty snacks to celebrate the Earth – stay tuned for photos. We hope you take some time to appreciate our planet today as well. Happy Earth Day! 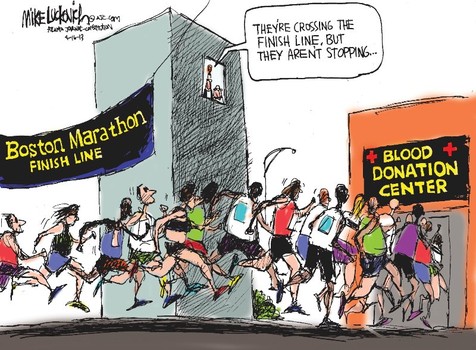 In the wake of the tragic bombings at the Boston Marathon, many immediately turned to social media as their primary source of information. While traditional news outlets like CNN and NBC were quick to live-report the unfolding events, their coverage lacked a key component: the status of people’s friends and loved ones in Boston.

That’s the new role that social media has taken on in tragic events like Monday’s bombings. While websites like Twitter and Vine provided vital updates for news coverage, the ever-present problem of false information has prevented these networks from becoming trustworthy news sources. Instead, social media has adopted a different role in times like this: providing worried friends and family with the comforting update, “I’m OK.”

While thousands turned to social media to ensure friends and family were safe, thousands more turned to the platforms in an effort to help. BIGfish President David Gerzof Richard appeared on NECN this morning to discuss the power of social media, noting the many beneficial ways it was used in the wake of Monday’s events. Terms like “donate,” “help,” and “volunteer” surged to a 180-day peak on Twitter, and thousands of homes were shared in a Google Doc offering people a place to stay. Google even launched Person Finder, where people can look for or provide information about anyone tied to the incident.

“What was really great was word spread very quickly, so that people were able to slow and stop marathoners from running into what was essentially a war zone,” David Gerzof Richard told the Boston Herald.

We have discussed the role of social media in times of tragedy before. In October, those affected by Hurricane Sandy took full advantage of social media to spread news around the country, and 10 photos were uploaded every second on Instagram. But the reaction to natural disasters differs greatly from the reaction to acts of terror. The tragic events at the Boston Marathon provoked a different type of response on social media platforms, one that ultimately reaffirmed our nation’s generosity and humanity.

In tragedy, social media has become much more than a news source. It has become an outpouring of support from people worldwide and a virtual meeting place for those affected by the events. Today, sites like Facebook and Twitter play a vital role in bringing nationwide news to a personal level – spurring on kindness and support in the process. 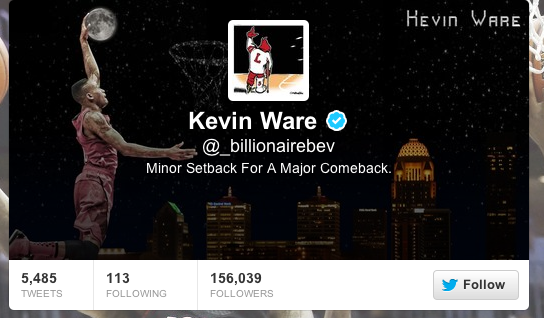 This past weekend, University of Louisville basketball player Kevin Ware suffered a devastating injury to his leg during a March Madness game against Duke University. Although the horrific injury has put Ware’s basketball career on hold indefinitely, Ware’s social media career has flourished in the days since his injury. Ware has both inspired and caught the attention of thousands of Twitter followers, which has allowed him to quickly rise to fame in the Twittersphere.

The story of Ware’s injury became a legendary March Madness moment, which was reflected when Ware’s name began trending on Twitter worldwide through the hashtag #prayforware. Numerous fans, players and celebrities alike have sent well wishing tweets to Ware, including Lil Wayne and LeBron James.

Ware’s personal tweets showcase his unwavering positive attitude, optimism and constant support of his teammates, which have translated into a significant spike in Twitter followers. Rising by the minute, Ware currently has more than 156,000 followers – a stat that increased by tens of thousands of new followers in the days following his injury.

Aside from blowing up on Twitter, Ware has also taken the Facebook world by storm. According to Facebook, Ware has become the most talked about player on the social networking site. Mentions of Ware on Facebook have increased an impressive 196,000 percent during March Madness.

Ware’s story demonstrates that posting content with a positive tone and a forward-looking attitude is a powerful and effective method to increase one’s Twitter followers. Additionally, users who promote optimistic and useful information are more likely to receive a larger number of followers than users who post funny, critical or self-involved content onto their Twitter feed.

The grace and humility that Kevin Ware demonstrated both on the court and on his social media feed reveals that the simple concepts of maintaining a positive attitude and showing gratitude towards others are invaluable lessons in a myriad of social and professional settings, including Twitter and Facebook. So for brands and users alike who are looking for a boost in their Twitter followers, try a little optimism and kindness. And remember: you’ll attract more Twitter followers with honey than with vinegar.