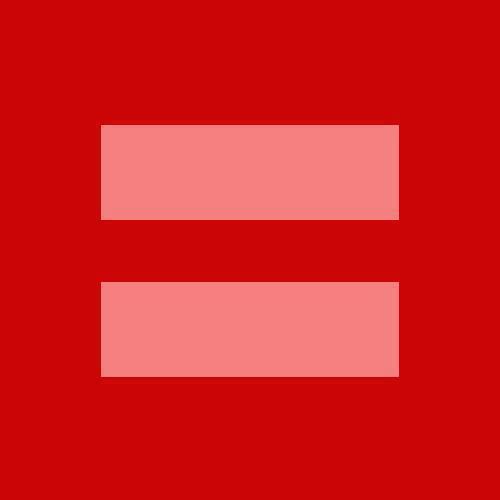 If you’ve logged into Facebook or Twitter today, chances are you’ve seen it: a pink equal sign over a red background. The image has taken social media by storm today thanks to the Human Rights Campaign, which is promoting the symbol to mobilize supporters for marriage equality. Today marks the first day the Supreme Court is hearing oral arguments over the constitutionality of Proposition 8 and the Defense Against Marriage Act.

Over the past seven hours, the red equal sign has received nearly 45,000 likes and more than 13,000 shares on the Human Rights Campaign’s Facebook page. And the virality doesn’t stop there – Mashable noted that actor George Takei has received more than 63,000 likes and 31,000 shares sincehe posted a photo of the red equal sign five hours ago, and several other celebrities have tweeted in support of the movement as well.
Several hashtags surrounding the Supreme Court’s hearings have remained in Twitter’s trends today as well, including #SCOTUS, #Prop8, #MarriageEquality, #UnitedforMarriage and a range of others.
However, the sudden virality of the Human Rights Campaign’s equal symbol shouldn’t come as a surprise. According to a Washington Post-ABC News poll released last week, 81% of 18-29 year olds support marriage equality. Similarly, Pew reports that 83% of 18-29 year olds use social networking – and 66% of social media users have used the platforms to comment about political candidates and issues. Of course, this isn’t the first time political issues have infiltrated social media; just last year, hundreds of websites went dark to fight SOPA and thousands changed their profile pictures in protest of the law.

Whether or not you changed your profile picture today, everyone can agree on this: the Internet has solidified its place as a platform for activism.

In the past, some advertisers noted that they were unsure whether their Twitter ad messages were reaching the right consumers. In August, Twitter revealed their plans to implement a general form of targeted advertising by allowing advertisers to customize an audience based on users’ interests for promoted tweets and accounts. The new features, released on Monday, enable advertisers to reach their exact target audience and give them access to Twitter’s control panel for reporting, analytics and optimization.

Armed with these new tools, brands now have the ability to customize which consumers they target, giving advertisers the opportunity to redefine their marketing approach and access many more potential consumers. With these upgrades, Twitter’s ad targeting options now include:

3. Target by Gender: Advertisers can choose to target either male or female users.

It’s about time Twitter made the leap into targeted advertising. Advertisers are crucial to the success of nearly any online platform nowadays, so Twitter should be doing everything it can to keep their advertisers happy. These new features also prove that Twitter is building a long-term, successful and profitable future for their company.

Twitter’s move to targeted advertising follows in the steps of Facebook and LinkedIn, both of which have already incorporated these tools into their services.

Facebook has the most developed and customized options for targeted advertising, allowing targeting based on users’ profile information and what brands and topics users “Like.” Facebook recently took their targeted ad tools a step further with the addition of the “AdChoices” icon on display ads, which provides enhanced notice of behavioral targeting and allows users to opt-out. LinkedIn also provides targeted advertising options, allowing targeting based on location, skills, job title, company name or LinkedIn group level.

With Facebook, LinkedIn and now Twitter all offering advertisers the tools to target their ideal audience based on interests, demographics and personal data, online ads are only becoming more relevant to the customers they reach. Happy Birthday, Twitter, and may the coming year be your most profitable yet.

Here’s a finding you may not be a fan of: the seemingly innocent act of “Liking” something on Facebook may reveal much more about your personal life than you intended.
While it does seem pretty obvious that Liking something on Facebook will reveal some information about your personal life – perhaps your minor cat obsession or your affinity for ‘Mad Men’ – it’s not so obvious that those Likes could reveal your gender, sexual orientation or use of addictive substances.

According to a new study out of the University of Cambridge, “Facebook Likes can be used to automatically and accurately predict a range of highly sensitive personal attributes including: sexual orientation, ethnicity, religious and political views, personality traits, intelligence, happiness, use of addictive substances, parental separation, age, and gender.”

The study, which involved more than 58,000 Facebook users, predicted personal attributes based on Facebook Likes at a strikingly accurate rate. Researchers were able to correctly discriminate between African Americans and Caucasians in 95% of cases, between homosexual and heterosexual men in 88% of cases, and between Democrats and Republicans in 85% of cases.
The study also found correlation between personality traits and Likes. Users who Liked curly fries, Mozart and The Colbert Report were more likely to have a high IQ, while those who Liked British author Terry Pratchett were more likely to be introverts.

The researchers have made the tool available to everyone at www.youarewhatyoulike.com, which you can log into using your Facebook account to get your “one click personality.” (It’s pretty fun to check out, regardless of how legitimate you think it is.)
From a marketing perspective, this study reminds us that the constantly-growing pool of online data available to advertisers can be used to effectively reach a targeted audience.
However, the study also reminds us of the importance of understanding your privacy settings. Just because you’ve ensured your Facebook photos and status updates are inaccessible to those who aren’t friends with you, it doesn’t mean you’ve made your Facebook Likes inaccessible as well. As always, becognizant of what you share – and that includes what you decide to Like on Facebook.

Back in January, we wrote a blog post arguing why brands should extend their online presence beyond Facebook and Twitter and into the YouTube realm in order to effectively reach online consumers. As the most used site among online consumers and the second largest search engine in the world, YouTube is an untapped gold mine for brand managers and marketing professionals alike who are looking to create user-friendly and engaging content and brand recognition.

Despite YouTube’s popularity with consumers, many brands are still overlooking the opportunity to maximize YouTube’s full potential by neglecting to apply basic search strategies to their videos.
To help inform brands on how best to utilize and improve their YouTube content and marketing, we’ve compiled a list of services available to complement a YouTube strategy:
VidIQ:
VidIQ is a start-up company, backed by well-known businessman and entrepreneur Mark Cuban, that offers tools to enable companies to monitor and manage their videos and apply SEO techniques to help videos rise in the search rankings. VidIQ features a primary SEO toolbox that encourages users to add more keywords to their videos. In addition, the toolbox provides guidance on the best time to publish new videos. Similar to what Hootsuite does for Twitter, VidIQ gives users analytic tools as well as the ability to monitor comments and buzz about videos. VidIQ offers a free self-starter package that includes: 1 channel, 1 user, video scheduling, Facebook app, basic analytics and bulk description editing. Users can also opt to upgrade to the Enterprise package for a higher cost, which includes multiple channels, multiple users, advanced analytics, bulk description editing and more.
Unified Social:
Similar to VidIQ, Unified Social is a marketing technology company that assists brands in activating their social audiences and impacting consumer actions. Unified Social features a unique Social Operating Platform (SOP) that helps brands oversee and manage their advertising across several social channels, including YouTube. The SOP offers data management, data security, portability and enterprise-wide services for social marketing. Think of the SOP as a large data warehouse that allows you to store, manage and organize information from YouTube, as well as your other social media channels, onto one platform. Interested users and brands must contact Unified Social for specific pricing options.
Raven Tools:
Raven is a company that provides brands with the tools to connect their YouTube accounts with their Raven account so that they can better monitor and evaluate their YouTube videos. Specifically, Raven Tools allows you to oversee your YouTube channels by: viewing quick statistics of subscribers and channel views, seeing advanced stats and exporting your YouTube channel data. There are also reports available with page views, time spent on site and lastly, Google Analytics goal conversions from YouTube referral traffic. Raven offers a free 30 day trial that encompasses unlimited Twitter, Facebook and YouTube accounts, customer support, 10 social media monitoring terms, analysis and more. There is also a pro package for $99 dollars a month and an agency package for $249 dollars a year, both of which are extended versions of the starter package.
Recommendation: For brands looking to maximize their potential on YouTube, VidIQ is the way to go. VidIQ’s tools are designed specifically to help users improve their YouTube search rank,  giving brands the opportunity to utilize SEO techniques and analytic tools in order to improve their overall presence on YouTube.
The increased availability of tools like VidIQ, Unified Social and Raven demonstrates that it is not enough for brands to simply produce engaging YouTube content. Brands must go beyond content creation and take an analytic and strategic approach to their YouTube videos in order to create a comprehensive online marketing strategy.