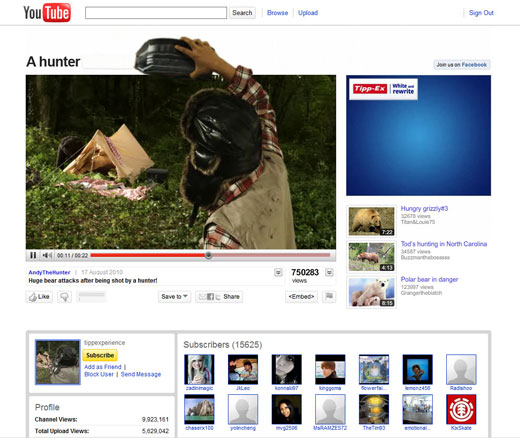 Of all the companies to come up with a totally unique and interactive YouTube campaign, white out maker Tipp-Ex would not be near the top of the list. But they have managed to create an interactive, truly fun, and viral (over 9.9 million channel views for the intro video) set of videos.
In the video a bear is eating from a tent, and a hunter holds a gun up to shoot him. After deciding he is unable to shoot the bear, he reaches off the screen, grabs the giant Tipp-Ex roller and whites out the ‘shoots’ in the ‘A hunter shoots a bear.’ The viewer is then asked to put words into where ‘shoots’ was. For example, if you type hug in, and hit enter, a video of the hunter and the bear in a long embrace appears. There are tons of videos created, so go ahead and type in any amount of fun words and see what they do!
While the initial video obviously isn’t an actual YouTube page, Tipp-Ex has create a frame to put on top of the page that looks very authentic. This will most likely be a trailblazer for YouTube interactivity campaigns because of its combination of humor and originality.
What do you think of the campaign?
See the video here: http://www.youtube.com/profile?user=tippexperience&annotation_id=annotation_980821&feature=iv